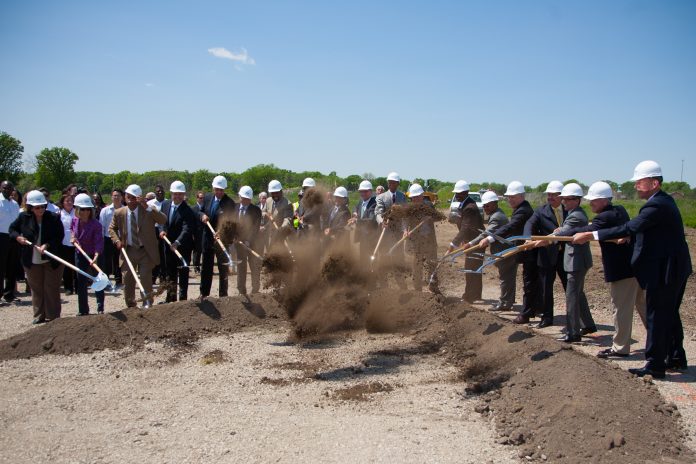 There was applause, appreciation, and grand exclamations delivered at the groundbreaking ceremony in mid-May for the Gateway Marketplace at Eight Mile and Woodward Avenue in Detroit. And there should be, as Hank Meijer says, it has been “a long, winding road.”

Despite years of negotiations and fine-tuning, the retail center, which will occupy 36 acres, officially is underway. A key term during the groundbreaking ceremony was collaboration, along with the importance of establishing a unified, self-sufficient city. Mayor Dave Bing compared the effort to building a team with a well-rounded roster where each player’s skills are put to the test.

Other adjectives from the event highlighted that theme. Bing used “transformation,” Gov. Rick Snyder “reinvention,” and Meijer “revitalization.” Another key term was traffic, as some 150,000 vehicles pass the site each day, says Elliott Hall, a member of Detroit Gateway Park Outlet Mall LLC and board member of the 8 Mile/Woodward Corridor Improvement Authority. The project, to be developed by Redico in Southfield, is expected to create 900 permanent jobs and 300 construction jobs.

Lisa Jackson cited the groundbreaking as a “historic day” for the city. The Palmer Woods resident says she’s tired of shopping in the suburbs, and looks forward to seeing suburban residents shop at such venues as Meijer, McDonald’s, K&G, Dots, and Marshall, among others.

Wayne County Executive Robert Ficano complimented Meijer for opening their first store in Detroit, though he cited the risks that accompany such a large venture. Grandson of the founder and current co-CEO and co-chairman Hank Meijer believes his business and Detroit will have a “happy marriage” that tackles the city’s “need for food.” Gov. Snyder took the moment to celebrate the introduction of a “good corporate citizen” in Meijer while revisiting the “difficult, hard work” that is ahead for the “comeback state.”

He added Detroit and Michigan must get back to their “roots” of producing the best products for a global marketplace, drawing more young people and entrepreneurs, hosting more events like the 2012 Chevrolet Belle Isle Grand Prix (June 1-3), and creating a conducive environment for families, neighborhoods, and services. The Gateway project joins the recent news that Whole Foods is opening a store in Detroit’s Midtown district.