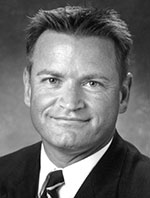 Russell brings more than 30 years of knowledge and experience in the nonprofit area to Detroit PAL. From the start, he has helped build organizational capacity utilizing a myriad of integrated marketing strategies, major gift and campaign efforts that catapulted organizations to new heights.

Prior to joining Detroit PAL, Russell worked on multiple organizations, including Forgotten Harvest. He also served three divisions as the executive director of development for The Salvation Army in Phoenix, Philadelphia, and Detroit with record-breaking years at each division.

Russell received his Bachelor or Arts in business administration and education at Mid America Nazarene University in Olathe, Kan.