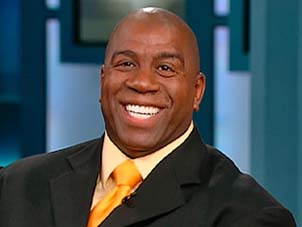 At a press conference brimming with fans and well wishers, Earvin “Magic” Johnson was named the fourth general partner of Detroit Venture Partners, an entity formed last fall to finance and mentor start-up and early stage technology businesses in the Motor City.

“The way Detroit is going to come back has to involve the public and private sectors coming together,” says Johnson. “So many talented young people are leaving Michigan because they don’t think there are opportunities here. We want to keep that talent here. We’re here to invest in you.”

Linkner says Detroit is a region underserved by venture capital. Since last November, 400 entrepreneurs have pitched their business ideas to DVP, and the group has invested in six startups, with another two in the pipeline. The company is looking to invest in a total of 12 businesses this year, and plans to continue to invest in 12 to 15 businesses on an annual basis.

DVP investments include FLUD, a news-reader application for smart phones; Hired My Way, which better connects job seekers and employers; Are You a Human?, a business that provides an alternative to the hard-to-read internet form “CAPTCHA;” Detroit Labs, which builds web, iOS, and Android applications; Gumshoe, an alternative reality game of Clue that can be played on smart phones; and Favers, which provides a social shopping platform for specialty retailers.

Initially, the companies will be housed in the Madison Building near Comerica Park, which is set to open in the fall. The 55,000-square-foot building will be fully occupied after it opens. DVP will announce a second downtown location in the coming months.

The DVP comes on the heels of Quicken Loans, which is in the closing stages of moving 4,500 workers from the suburbs into downtown Detroit. Already, Quicken Loans has had an economic impact of $1 billion, and occupies or has interest in some 1.3 million square feet of office spaces in downtown Detroit.

DVP says it looks for “vibrant, high-tech companies,” and invests exclusively in the areas of digital media, software, cloud computing, e-commerce, marketing technology, mobile apps, the Internet, and social networks. Linkner calls the effort “Detroit 2.0,” with a goal of making Detroit “bigger” than it ever was. “Young people need that financial backing,” Johnson says. “And we want to give them that opportunity.”

DVP isn’t like most venture firms. The goal is to throw as much financial support as possible behind entrepreneurs as well as teach them how to be more successful. “This is really unique,” Johnson says. “We’re gonna write a check and give you the time.”

Johnson adds he will spend more time in Michigan — he grew up in Lansing, attended Michigan State University, and played for several years with the Los Angeles Lakers —with the goal of helping to rebuild Detroit. Citing the fact that there are now two former NBA All-Star point guards in the city, Mayor Dave Bing welcomed Johnson with open arms. “The government doesn’t create jobs,” says Bing. “Businesses do.”