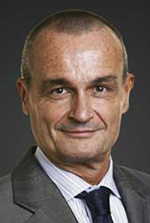 The French-American Chamber of Commerce, Michigan Chapter, will host Gérard Araud, ambassador of France to the United States, at a networking reception next week in Auburn Hills. The event is open to both chamber members and non-members.

“France is Michigan’s fourth largest trading partner; it is an honor for FACC Michigan to host Ambassador Araud and better acquaint him with the advances French companies are making with technology, manufacturing and autonomous vehicle support here in Southeast Michigan,” says Cedric Ballarin, chamber   president and a vice president in the Michigan headquarters of France-based Faurecia. Araud visit auto suppliers Faurecia and Valeo.

The chamber is a  not-for-profit business organization committed to the improvement of economic, commercial and financial relations between France and the United States and offering a variety of business, educational, and social opportunities to its members.