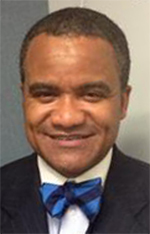 Rashid Faisal has been named founding principal of the Frederick Douglass International Academy, due to open this fall in Oak Park.

Previously, Faisal served as project manager and achievement adviser for Pearson School Achievement Services Inc., where he provided school improvement and leadership consultation to schools in metro Detroit. Prior to joining Pearson, Faisal served as an elementary and middle school principal where he helped to transform the academic and school climate of schools classified as low performing.

Faisal, of Detroit, has received numerous awards and honors, including being named a finalist for Educator of the Year by the Michigan Association of Public School Academies; WhoÊ¼s Who Among American Colleges and Universities; Kappa Gamma Pi Catholic Honor Society; Golden Key International Honor Society, and Educator of the Year by the Alabama A & M Alumni Association and the State of Michigan. His pre-leadership experience also includes 10 years as elementary teacher, facilitator of Title I services, and reading specialist.

Faisal holds a bachelor’s in English and elementary education and Sociology from Madonna University; a Master’s of Arts in education and reading from the University of Michigan-Dearborn and a master’s of education in organizational leadership from Teachers College of Columbia University.