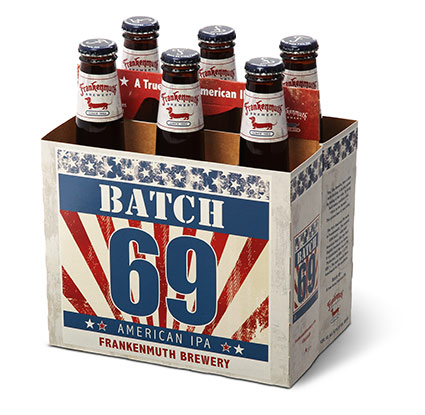 “There was lots of great competition from a lot of very reputable Michigan and national breweries, so taking the gold medal is a great honor,” says Brewmaster Steve Buszka of Frankenmuth Brewery.

Since joining the Frankenmuth Brewery last November, Buszka has made a few changes to the Batch 69 recipe which immediately reaped dividends among consumers. He says Batch 69 American IPA is now dry-hopped to trap in aromatics during fermentation and to create a more balanced drinking experience.

Buszka says he and his brew team were extremely proud that Batch 69 American IPA was named the gold medal winner, especially considering how recently the recipe was changed.

“I decided to tweak the recipe by using a couple different hop varieties and also dry-hopping it, which wasn’t done before,” Buszka says. “The IBUs are exactly the same and it still holds up to the 69 IBUs. But now, the hops are put in the boil at a different point in time, so it has more of a balanced flavor on your palate, as opposed to single-note bitterness.”

Batch 69 IPA is one of Frankenmuth Brewery’s flagship beers and available around the state in both package and draft.