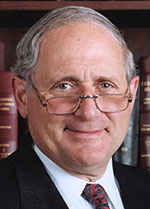 In his 36-year Senate career, Levin served as chairman of the Armed Services Committee, becoming a leading voice on military and foreign affairs, as chairman of the Senate’s Permanent Subcommittee on Investigations, which involved the analysis of complex business financial matters, and as a member of the Small Business and Entrepreneurship Committee. Prior to his service IN Washington, Levin was president of the Detroit City Council.

The focus of Levin’s practice at Honigman will include aiding corporations with internal investigations and crisis management; assisting corporations with social responsibility and compliance issues; and facilitating alternative dispute resolutions and mediations.  In addition, Levin will serve as an advisor to the firm’s government relations and regulatory practice group.

Levin is a life-long supporter of Michigan’s communities and will continue in that role working closely with the Honigman community involvement team. He was instrumental in obtaining federal funding for the development of Detroit’s riverfront and the M1-Rail system. At Honigman, Levin will also actively participate in advancing the firm’s younger attorneys’ knowledge of the workings of government and the interplay between government and business.

Levin earned a juris doctorate from Harvard Law School and a Bachelor of Arts in political science from Swarthmore College in Pennsylvania.