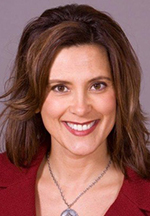 Gretchen Whitmer, the former minority leader in the Michigan Senate, has rejoined Lansing-based Dickinson Wright PLLC, the firm where she began her legal career.

Whitmer was previously a litigator at Dickinson Wright prior to her election to the state legislature. She received her Bachelor of Arts in communications and her juris doctor from Michigan State University.