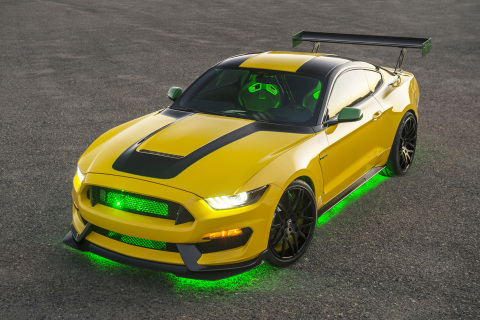 Dearborn-based Ford Motor Co. has unveiled a new aviation-inspired Mustang, which will be auctioned off to benefit the Wisconsin-based Experimental Aircraft Association’s youth education programs.

“This year’s one-of-a-kind Ford Mustang honors two aviation greats, the iconic and historic P-51D Mustang fighter plane, and highly decorated fighter pilot, test pilot, and air show performer, Bob Hoover, who is referred to by many as one of the greatest pilots ever to have lived,” says Edsel B. Ford II, a member of the Ford board of directors.

He says the Ole Yeller Mustang vehicle is track-ready and road-legal, and projects images of the P-51D fighter plane with its custom yellow exterior finish, Ole Yeller accents and badging, unique carbon fiber components, and mirrors.

The Mustang will be donated and sold via auction at the Gathering of Eagles charity event — the ninth straight year Ford has donated a car — on July 28 at the Experimental Aircraft Association’s AirVenture Oshkosh 2016.

The Ford Ole Yeller Mustang joins eight other Mustangs created by the Ford design and engineering teams for the auction in support of the association’s youth education. Ford vehicles donated to the association’s events have collectively raised $3 million.