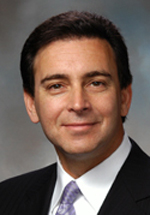 Fields’ role as 2013-2014 Campaign Chair builds on the thriving long-term partnership between Ford Motor Company and United Way. Ford has contributed more to the United Way for Southeastern Michigan than any other corporation since the organization was founded in 1949.

The company and United Way have collaborated to place countless Ford employees as volunteers in local nonprofit agencies, serve more than 1.1 million meals in metro Detroit through their Mobile Food Pantries program and build wheelchair ramps for dozens of local families, among other initiatives.

Ford has been a major presence in the metro Detroit community since the company was founded here more than 100 years ago, and Ford Fund — our philanthropic arm — has contributed significantly during the last 64 years since its founding. The company also works hand-in-hand on many charitable initiatives with its UAW partners.

Ford has invested hundreds of millions of dollars in nonprofit organizations and programs supporting education, community development, arts and culture. Its investment in Detroit during the past five years alone is roughly $60 million.

“Our One Ford team is dedicated to doing our part to build a better world, and that starts with the metro Detroit community where our company was founded,” Fields said. “We look forward to supporting United Way’s efforts by raising funds to support education, boost financial self-sufficiency and reduce hunger for those in need.”

“We are now looking ahead to the coming year and thank incoming Campaign Chair Mark Fields for agreeing to carry the torch forward with a visionary approach to meeting our next annual goal,” Brennan said. “We are grateful for his enthusiasm for and dedication to United Way’s mission.”