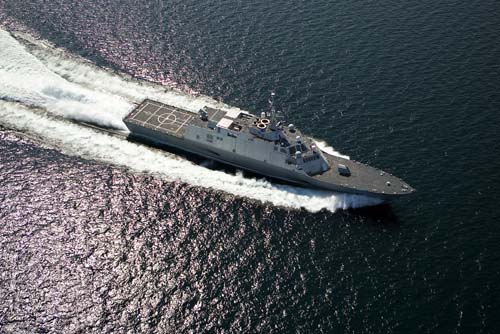 It seems as if the tide is turning for the city of Detroit.

USS Detroit is one of the Navy’s scheduled 55 new Littoral Combat Ships (LCS) that will eventually make up more than 15 percent of the Navy fleet, according to officials.

It will be one of 10 LCS ships constructed by Marinette Marine Corp.’s shipyard in Marinette, Wisc. near the Wisconsin-Michigan border. It will be commissioned in Detroit in 2014. “There couldn’t be a better place to commission it then in the city of Detroit on the riverfront,” Mabus says.

The construction of USS Detroit (LCS 7) is estimated to cost $439 million and will bring over 500 direct jobs and more than 3,000 indirect jobs to Michigan.

“Detroit is a proud city with a strong maritime history and a long track record of providing for the nation’s defense,” says Levin. “I’m proud that Michiganians will play a strong role in the construction of the USS Detroit, and I look forward to seeing her completed.”

The LCS is a fast, maneuverable surface combatant that provides war fighter capabilities and operational flexibility to execute focused missions close to shore such as mine warfare, anti-submarine warfare, and surface warfare. It is designed to defeat growing littoral threats and provides access and dominance in coastal waters.