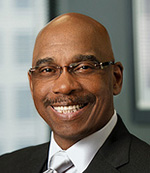 As membership chair, Howard is serving a one-year term during which he is responsible for identifying and onboarding quality members for the organization. Since the chapter’s founding in 1994, the organization has grown to 146 members, generating a combined $1 billion in sales and employing more than 7,000 employees.

Howard joined Entrepreneurs’ Organization Detroit in 2012 and is the president and CEO of Powerlink. Headquartered in Detroit, Powerlink provides support services, including staffing and facilities management, to organizations such as Henry Ford Health System, Karmanos Cancer Institute, and the Detroit Public Schools.

A U.S. Air Force Vietnam Veteran and former equal employment opportunity manager for the U.S. Air National Guard, Howard began his career in the private sector at an automotive supplier in 1997, quickly rising to become vice president due to his discipline for providing continuous improvement and rigorous metrics from manufacturing into facilities maintenance.

A lifelong Detroit resident, Howard serves as pastor at Faith Christian Community Church in Port Huron and volunteers his time with local youth and educational focused nonprofits, including Winning Futures. He is also actively involved with missionary work in West Africa.