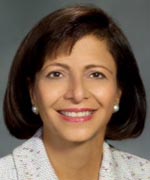 Hammer has been a member of the society since 2004 and served as its vice president for the past two years. Her professional career includes 26 years of increasing responsibility as an officer of Dearborn-based Ghafari. In her current role, she is responsible for leading and managing all aspects of the business. In the late 1980s and early 1990s, she was instrumental in the acquisition and integration of three architectural and engineering firms over a two-year span, which aided the company in diversifying its client base. She became president and CEO of Ghafari in 2000.

Under her leadership, Ghafari continues to apply cutting-edge technology for the benefit of its clients. As a result, the company’s projects have received multiple industry awards, recognitions, and have been the subjects for several best practice case studies, articles, and presentations.
Prior to joining Ghafari, Hammer served for more than seven years on the professional staff of a major CPA firm, progressing to a senior manager. Her term as ESD’s president will end in June 2015.