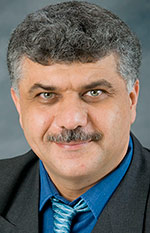 YPSILANTI — Mohamad Qatu has been named the dean of the College of Technology at Eastern Michigan University.

Previously, Qatu served as the director of the School of Engineering and Technology at Central Michigan University. Before that, he was a professor of mechanical engineering at Mississippi State University in Starkville, Miss.

His extensive industry background includes research and managerial roles with Ford Motor Co. in Dearborn from and as a senior research engineer at the Dana Corp. in Auburn Hills.

He has published more than 140 research articles, most of which are in refereed journals. He is the editor in chief of the International Journal of Vehicle Noise and Vibration; the author of four books; and a Fellow of the Society of Automotive Engineers and the American Society of Mechanical Engineers. He has two patents and prior art registered to his credit on noise suppression.

Qatu, a native of Jordan, earned a bachelor’s degree in engineering from Yarmouk University in Jordan, and his master’s and doctoral degrees in engineering mechanics from The Ohio State University.

Qatu’s appointment subject to approval by the EMU Board of Regents.