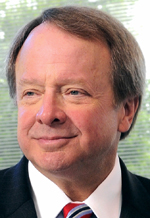 SOUTHFIELD  — The Engineering Society of Detroit has bestowed its highest honor — the 2013 Horace H. Rackham Humanitarian Award to Edsel B. Ford II, member of Ford Motor Co.’s Board of Directors and owner and chairman of Pentastar Aviation.

The Rackham Award is presented in recognition of an individual’s “outstanding humanitarian achievements as exemplified by meritorious technical accomplishments for the benefit of mankind or by recognition on either a local, national or international level for extraordinary achievements in civic, business, public-spirited or humanitarian endeavors.”

Ford is a board member of the International Speedway Corp. and the former Chairman of the Detroit Branch of the Chicago Federal Reserve Bank. His philanthropic activities are numerous . He is the former chairman of the National Advisory Board of the Salvation Army, and current trustee of both The Skillman Foundation and The Smithsonian National Air and Space Museum. He is also very passionate about juvenile diabetes, leading the Ford Global Walk Team, which since 1984 has raised more than $43 million for diabetes research.

“We’re very pleased to bestow the Rackham Humanitarian Award to Mr. Edsel Ford,” said ESD’s Executive Vice President Darlene Trudell. “Mr. Ford has selflessly donated many hours of his time to numerous nonprofit and charitable organizations, and has been a strong supporter of children’s education, so we can fill Michigan’s pipeline with the next generation of engineers and scientists.”

In addition to his civic activities, Ford is the owner and chairman of Pentastar Aviation, an aviation services provider headquartered at the Oakland County International Airport in suburban Detroit. He is also the majority owner and chairman of Marketing Associates, a Detroit based marketing services company.

Born in Detroit, Ford received a bachelor’s degree in business administration from Babson College in and completed the Program for Management Development at the Harvard Business School.

Ford will receive his award during ESD’s Annual Awards Dinner on June 27 at The Henry Ford Museum. The ESD Annual Dinner is open to the general public. For more information about the event, visit www.esd.org or call 248-353-0735, ext. 112.