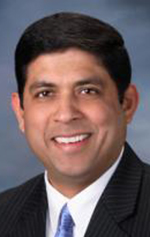 Galesburg-based Eaton has named Pavan Pattada as president of the vehicle group for North America, in the power management company with offices in Southfield and Galesburg.

Pattada joined Eaton in 2002 as the director of global sourcing for corporate supply chain management, was named general manager of Eaton’s Truck business in India in 2005, and in 2009 became director of operations for North American Truck. Prior to his most recent position with Eaton, Pattada was the vice president of business development for the industrial sector.

Before joining Eaton, Pattada held a series of managerial and consulting positions with Deloitte Consulting in Cleveland and was a chief officer, Ship Operations with Dole Fresh Fruit Inc. in Costa Rica.

Pattada has a bachelor’s degree from LBS College of Advanced Maritime Studies in Mumbai, India and a master’s degree in strategy and administration from Duke University in North Carolina.