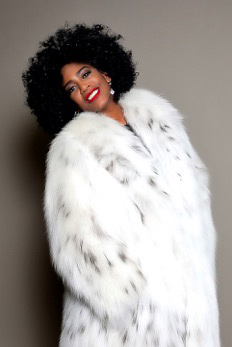 A collection of eight elegant fur coats, capes, and stoles worn during the 1980s hit TV series Dynasty has arrived from Hollywood to be used in a special auction to benefit the Ronald McDonald House in Detroit.

The furs were purchased from Bricker Tunis Furs in West Bloomfield and were worn by actresses Joan Collins, Linda Evans and Diahann Carol.

Bricker Tunis Furs, which is celebrating 100 years in business, will hold the auction from 5-8 p.m. Jan. 18 at the store, located at 6335 Orchard Lake Rd. in  West Bloomfield. The community is invited to this luxury auction, with champagne, wine and light appetizers, and music by Mike and Mike.

Ten percent of all sales that evening — the auction furs and other merchandise — will benefit the Ronald McDonald House of Detroit. The starting bid for a white Russian lynx valued at $200,000 and worn by actress Linda Evans, who played Crystal Carrington, is $20,000. Opening bids for other furs worn on the show start at $1,350.

Owner Arthur Bricker says the furs have been in cold storage in Hollywood since the show ended after airing on ABC from 1981-1989. The TV series centered on a wealthy Denver family in the oil business and the actresses were known for their fabulous furs and elegant attire.

“I was so excited to find out we could get these furs back.,” Bicker says. “They are like brand new, all in perfect condition and absolutely gorgeous. These are definitely pieces that women will love. They have timeless appeal as premier furs. By auctioning them, we can help raise money for a good cause, the Ronald McDonald House of Detroit.”

Jennifer Litomisky, executive director of the Ronald McDonald House, says the funds raised by the auction will go toward a $3 million expansion campaign.

The furs and other starting bids can be viewed at the Bricker Tunis Furs store or online at  brickertunisfur.com. Bids are accepted now through the day of the auction.

For guests at the Ronald McDonald House of Detroit with a child undergoing treatment at an area hospital, a $10 daily fee is charged for a guest room and use of common areas including a kitchen, laundry room, playroom and entertainment areas. No family is turned away due to a lack of funds.