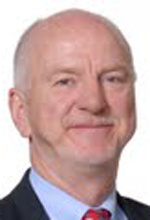 DETROIT  — Dykema, a national law firm, announced that the firm has hired Richard Holdrup as its chief operating officer. Prior to joining Dykema, Holdrup was chief financial officer at Dorsey and Whitney LLP in Minneapolis.

Holdrup, who will work from the firm’s Detroit office, brings to this position over 30 years of financial and administrative management experience with corporations and large law firms. While at Dorsey and Whitney, he led the firm’s financial operations, as well as its facilities management, client intake, information technology, and resources functions.

“Richard is a well-rounded, strategic thinker with a sharp focus on law firm financial performance,” said Peter Kellett, chairman and CEO of Dykema. “He will do an effective job carrying out our goals and helping the firm advance its client service delivery. He also brings professional excellence, personal integrity, and strong leadership skills to the position.”

Holdrup entered the legal industry in 2002 when he worked as chief financial officer for Squire Sanders in Cleveland and later held similar positions at Heller Ehrman and Howard Rice, both in San Francisco. While at Howard Rice, he was a member of a three-person team which successfully negotiated a combination with Arnold and Porter in 2012. Prior to working in the legal industry, he held a number of senior financial positions in the consumer products industry.

“The legal industry is becoming more and more complex as client demands and needs evolve,” Holdrup said. “I look forward to working at Dykema and bringing my strategic outlook, financial skills, and hands-on operational expertise to the position.”

Holdrup received his Bachelor of Arts in finance from Baldwin-Wallace College and his MBA from Harvard University Graduate School of Business.