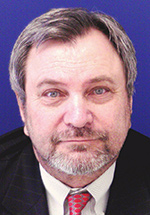 In addition to continuing to oversee the building authority and all construction activities in the city (such as Department of Public Works and the Detroit Water and Sewerage Department), Manardo will be responsible for overseeing the following departments: DPW, the General Services Department, the Public Lighting Department and Coleman A. Young International Airport. He will also coordinate city activities with the Detroit Land Bank Authority, Public Lighting Authority and the water department.

Manardo brings more than 40 years of experience, having begun his career in the construction industry through the International Brotherhood of Electrical Workers Local Union No. 58 in Detroit. Previously, Manardo worked at the Detroit Medical Center as facilities supervisor at Grace Hospital. Through his more than 30 years at the DMC, he rose to the position of senior vice president of facility and real estate services.

Manardo, a master electrician, holds a bachelor’s in mechanical engineering and a master’s in civil engineering, both from Wayne State University, as well as an MBA from the University of Detroit.