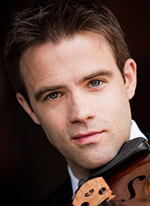 Following an international audition process, the Detroit Symphony Orchestra has signed Eric Nowlin to its Julie and Ed Levy, Jr. Principal Viola Chair. Nowlin is currently associate principal viola for the Toronto Symphony Orchestra and will join the DSO roster at the beginning of the 2016-17 season.

Nowlin is a violist of the Opus Award-winning and Juno-nominated New Orford String Quartet. He served as guest principal viola with the Saint Paul Chamber Orchestra, the Metropolis Ensemble, and Cleveland’s Citymusic and as substitute viola with the New York Philharmonic.

He grew up in Missouri and Wisconsin before spending his last two years of high school at Interlochen Center for the Arts in Northern Michigan.

Nowlin was selected from among dozens of candidates who came to Detroit from around the world to take the audition.