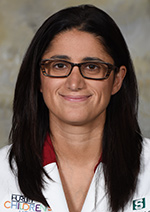 Hanna-Attisha, formerly of Royal Oak, will be honored on April 29 at the Shenandoah Country Club in West Bloomfield. FOX-2 and WWJ Newsradio 950 reporter Charlie Langton will serve as master of ceremonies during the awards dinner.

After spending numerous hours researching the Flint water crisis, Hanna-Attisha, has emerged as the face of advocacy for Flint’s affected residents and relief efforts on their behalf. In addition, she’s been named the head of the new Pediatric Public Health Initiative designed to combat the effects of lead poisoning for Flint’s residents, particularly its children.

Also being honored will be Bas and Tanya Robin, co-owners of Superior Buick GMC, as Business Persons of the Year. Dedicated to business and philanthropy in the community, the Robins overcame adversity and challenges to become the first Chaldeans to own a GM car dealership in the country when they purchased Superior Buick GMC of Dearborn in 2015.

The evening will include a cocktail reception, dinner and awards ceremony. Tickets are $175 per person or $1,500 for a table of 10. Sponsorships are also available.

Those interested in attending or sponsoring may call 248.996.8340 for event or ticket information, or email info@chaldeanchamber.com for more information.