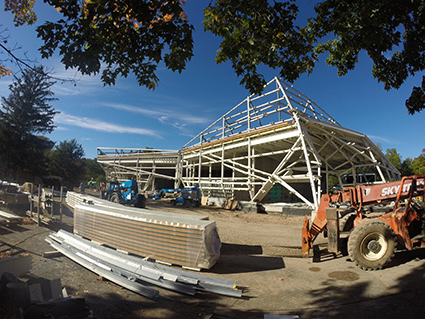 The Polk Penguin Conservation Center at the Detroit Zoo is making significant progress toward completion after construction began nearly 15 months ago on the 33,000-square-foot facility. When the center opens in early 2016, it will be the largest penguin facility in the world, home to more than 80 penguins.

“An incredible amount of research has gone into the development of the Polk Penguin Conservation Center’s unique and authentic design, including us actually crossing the Drake Passage to Antarctica and observing thousands of penguins in the wild,” says Ron Kagan Detroit Zoological Society executive director and CEO. “This will be the most extraordinary conservation center for penguins in the world and will redefine ‘state of the art’ for penguin habitats, just as our Penguinarium did in 1968. People will come from all over the world to see this amazing facility.”

One of the most dramatic features of the center will be a chilled, 326,000-gallon, 25-foot-deep aquatic area where visitors will be able to watch penguins as they explore their habitat and deep-dive – something that is otherwise impossible to see, even in the wild. Two acrylic underwater tunnels — similar to those in the Detroit Zoo’s award-winning Arctic Ring of Life — will offer views overhead and below as the birds swim, dive and soar.

In addition to erecting the steel, spraying the gunite and installing acrylic panels — one of which weighs 37,000 pounds — other preparations for the center have been underway, including the arrival of a new species of penguin to the Detroit Zoo. In early 2015, three gentoo penguins made their debut, setting the stage for many more of their species to come. The gentoo is the third-largest penguin and – like the macaroni, rockhopper and king – is native to extremely cold-weather climates. More gentoos are due to arrive in the coming months as completion of the center nears.

The zoo was recently honored with the 2015 Green Award by the Association of Zoos & Aquariums in recognition of these and other green efforts under the organization’s Greenprint – a strategic plan to ensure that daily practices and policies along with facility design at the Detroit Zoo and Belle Isle Nature Zoo are implemented in the most energy-efficient and sustainable manner. The prestigious award recognizes green programs that exist institution-wide in the 230 AZA-accredited zoos and aquariums to reduce the environmental impact of an organization from a business operations standpoint.

The Detroit Zoo also supports penguin conservation programs around the world, including providing funding for the Polar Oceans Research Group, led by world-renowned polar ecologist and penguin expert Dr. Bill Fraser, who consulted in the design of the center. When complete, the facility will provide a forum to engage Detroit Zoo visitors in these programs, to educate them on the threats that penguins face across the southern hemisphere, and to even meet some of the scientists working with penguins in the wild.