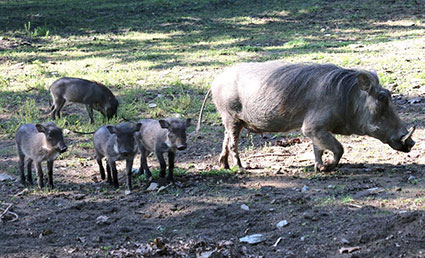 ROYAL OAK — The Detroit Zoo is celebrating the birth of five warthog piglets, bringing the warthog count at the zoo to 12.

“Like all pigs, warthogs are smart and precocious and a lot of fun to watch running and rooting around in their habitat,” says Scott Carter, chief life sciences officer for the Detroit Zoological Society.

Born on April 8 as the third birth in three years to Lillith, 10, and Linus, 5, the piglets — Daenerys, Sansa, Cersei, Tyrion and Hodor — were named after characters from the HBO show “Game of Thrones.”

Four of the five new arrivals can be seen in their habitat near the Africa Train Station. Tyrion, the smallest of the litter, must put on more weight before he can join the rest of the group.

Found primarily in the savannah woodland and grasslands of sub-Saharan Africa, when fully grown, warthogs will stand at about 30 inches tall at the shoulder and weigh between 125 and 300 pounds.