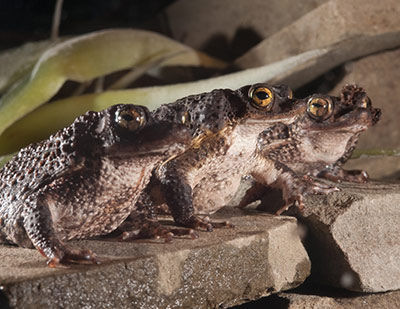 ROYAL OAK — The Detroit Zoo’s breeding efforts for the critically endangered Puerto Rican crested toad have yielded the best results in the zoo’s history with a record 22,571 tadpoles. Twenty tadpoles have been retained for future breeding at the National Amphibian Conservation Center while the rest were shipped last week to Cabo Rojo, Puerto Rico, for release into the wild.

“We are thrilled to set a record – and reach a new milestone – by placing more than twenty thousand endangered Puerto Rican crested toad tadpoles into the wild this year,” says Scott Carter, chief life sciences officer.

The Detroit Zoo began working to preserve the Puerto Rican crested toad (Peltophryne lemur) in 1999. Since 2008, more than 47,000 tadpoles have been released into the wild.

Carter says the Puerto Rican crested toad has greenish-brown pebbled skin and marbled golden eyes. It grows 3-4 inches long and has the ability to almost completely flatten its body to fit into tiny crevices. The toads that reside at the Detroit Zoo can be tricky to spot, but visitors can often see their large eyeballs and pointy, hooked noses peering out from under their limestone homes.

The award-winning National Amphibian Conservation Center — a leader in amphibian conservation and research — is a state-of-the-art facility that boasts a spectacular diversity of frogs, toads, salamanders, newts ,and caecilians. The Wall Street Journal dubbed the attraction “Disneyland for toads.”