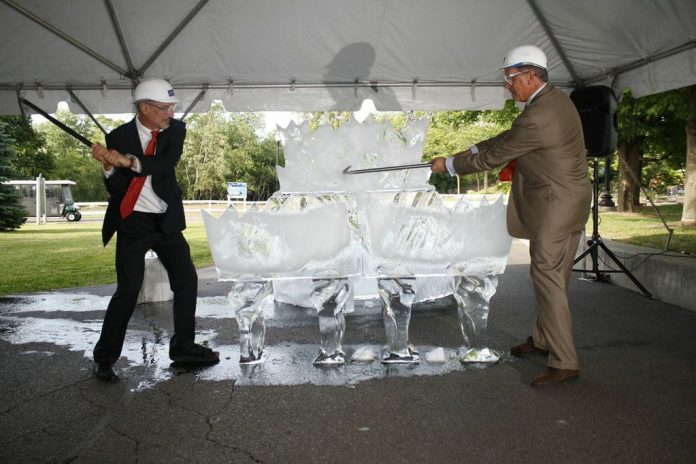 ROYAL OAK — Detroit Zoological Society board members, donors, staff and guests gathered at the Detroit Zoo Tuesday evening to ceremoniously “break the ice” on the Polk Penguin Conservation Center. The groundbreaking event marks the beginning of an 18-month development period for the largest project the zoo has ever undertaken. The facility will be built on a 2-acre site just inside the zoo’s entrance and is slated to open in late 2015.

More than 100 design, engineering, and construction jobs will be created and sustained for the development period of the Polk Penguin Center. With an associated annual increase of about 250,000 visitors, it is estimated that the Detroit Zoo’s revenue will increase by at least $2 million annually. The new attraction is expected to have a regional economic impact of as much as $10 million per year, adding to the current $100 million economic influence the zoo already has on the region.

Detroit Zoological Society Executive Director and CEO Ron Kagan and Vice Chairman Stephen Polk — whose family donated the $10 million lead gift for the project — swung ice axes at a wall of ice Tuesday, which shattered to reveal an ice-carved model of the Polk Penguin Center.

“We are thrilled to be moving forward with our plans for this amazing place for people and penguins that will be centered on conservation. It will be an extraordinary and unique experience for our guests,” said Kagan.

One of the most dramatic features of the $29.5 million, 33,000-square-foot facility will be a penguin “deep dive” with views above and below water as the birds dive and soar through a chilled 326,000-gallon, 25-foot-deep aquatic area. That feature, deeper and larger than the aquatic area at the Detroit Zoo’s Arctic Ring of Life, will give visitors the rare opportunity to observe penguins as they deep-water dive.

In addition to the $10 million grant from the Polk Family Fund — the largest gift in the history of the Detroit Zoological Society — the William Davidson Foundation Fund has committed $3 million toward the development of the Polk Penguin Center. Twelve gifts of $100,000 or more have set the pace for contributions from individuals and corporate and family foundations. The Detroit Zoological Society board has committed $8.5 million, bringing funds secured for the project to $25.2 million and leaving $4.3 million yet to be raised.

For more information or to make a philanthropic investment in the Polk Penguin Conservation Center, visit dzoo.org/pcc.

To learn more about the Detroit Zoological Society, go to detroitzoo.org.