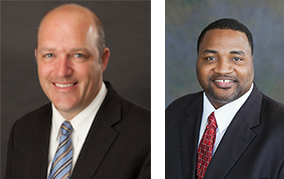 The board of directors of the Detroit/Wayne County Port Authority (DWCPA) have announced the election of Shannon Price as chairman and Jonathan C. Kinloch as vice chairman. Price has replaced Lorron James, who stepped down from the board in May, and Kinloch has replaced Fred Hoffman, who continues to serve as a board member.

“I am very honored to have been elected by my fellow board members to serve as chairman of the DWCPA Board of Directors,” says Price. “During my nearly six months on the board, I have been a part of a number of very promising conversations involving the future of this vital agency. I look forward to continuing the work that’s already being done and doing whatever I can to help advance the agency’s mission.”

Prior to joining the board, Price performed constituent relations for the Attorney General’s office for Mike Cox and Bill Schuette. He also served as Wayne county commissioner from 2013-2015 and Plymouth Township supervisor from 2015-2016. In both roles, he was responsible for economic development, developing and managing multi-million-dollar budgets, and collaborating with neighboring communities.

Price joined the board in April for a four-year term, replacing Alisha Bell. His experience includes working with nonprofit organizations and local municipalities in developing and implementing initiatives.

Kinloch previously served as vice chairman of DWCPA from May 2014-June 2016 and has been engaged in Detroit’s social and civic community for more than 20 years.

“It is a privilege to once again be elected to this position, which I will use to continue championing the work being done by the DWCPA to strengthen the region,” says Kinloch. “I look forward to working closely with Shannon and the entire board to provide the necessary leadership to help guide and support the agency’s operations.”

DWCPA is a government agency advancing southeast Michigan’s maritime and related industries to provide prosperity and economic benefit to the citizens and businesses of the region. DWCPA has raised awareness of the importance of the Port of Detroit and has supported and facilitated economic development activities for more than 35 years.