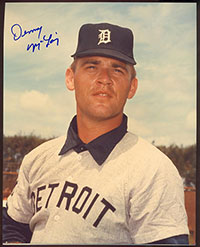 OAKLAND TOWNSHIP — World Series Pitcher of the 1968 Detroit Tigers, Denny McLain, will be performing a preview of his two-man play to local men and boys at Oakland Church this month.

Titled “Ty Cobb & Denny McLain – Tiger Tales,” the play features McLain and actor Norm Coleman as they examine the game of baseball and the retrospective of the lives of Cobb and McLain.

“McLain was brash and outspoken, but his performance on the field more than made up for it,” says Pastor Dominic Russo, head pastor of Oakland Church. “His stellar performance at the beginning of his professional baseball career was a marked contrast to his personal life.”

The event will take place during the church’s Men’s Breakfast Gathering on June 20. It is open to all ages, and will begin at 9 a.m. Tickets are $10 before Monday, and $15 at the door. Questions as well as a baseball memorabilia auction will take place after the performance.