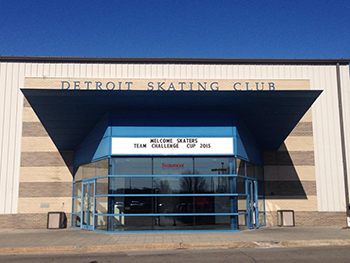 The Detroit Sports Commission today submitted a bid to host the 2018 U.S. Figure Skating Championships, the final qualifying event prior to the selection of the U.S. Olympic Figure Skating Team that will represent Team USA at the Winter Olympics.

“The entire metro Detroit region would benefit from the vast media coverage and significant direct spending the U.S. Championships and its thousands of visitors would provide,” Beachnau says.

If selected, all junior and championship level events would be held at the new Detroit Events Center, while juvenile, intermediate, and novice events would be conducted at the Detroit Skating Club in Bloomfield Hills.

“Detroit is a mecca for ice sports and has been for so many years,” Davis says. “I think a city that has given so much to the world of figure skating deserves to host such an important event in the sport.”

If awarded, the U.S. Championships would return to Detroit for the first time since 1994. Most recently, the Detroit region hosted Skate America and the U.S. Synchronized Skating Championships in 2013.

“As one of the largest and most important centers of figure skating in America, Detroit will have the best infrastructure as well as the perfect atmosphere to host the most important U.S. Championships,” White says.

The U.S. Championships annually attract more than 1,500 athletes, coaches, and officials to the host community, and the championships have generated $20-$25 million in economic impact for recent host cities.

The decision is expected to be announced in the summer.