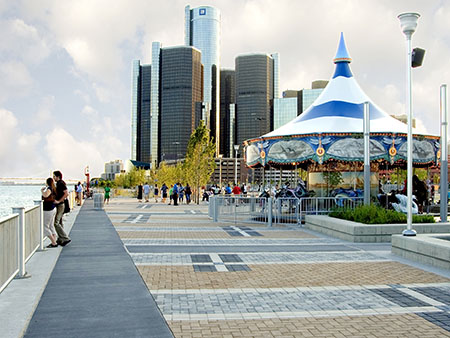 DETROIT — The Detroit riverfront has spurred $1 billion in investment on or along the riverfront over the past 10 years, which also includes projects currently under construction or planned for completion in the next several years, according to an Economic Impact Study released by the non-profit Detroit RiverFront Conservancy.

“The Conservancy was launched in 2003 to not only develop public access to the riverfront, but to also serve as a catalyst for economic development,” Matt Cullen said, chairman of the Detroit RiverFront Conservancy Board. “As we mark our 10th anniversary, we think it is the right time to take a deeper look at how the new riverfront is contributing to an improved quality of life for Detroiters and our region, and at the same time, driving significant economic development for our community.”

The study was commissioned by the Conservancy and conducted by Conventions, Sports & Leisure International, a leading advisory and planning firm. They worked closely with the Conservancy throughout 2012, as well as the city of Detroit and with numerous public agencies and private sector entities, to conduct extensive research to better understand the economic impact return associated by the riverfront investment that has taken place over the last decade.

“The impact of the Detroit riverfront development goes beyond the construction completed by the Conservancy and our public and private partners over the last decade,” Faye Alexander Nelson said, president & CEO, Detroit RiverFront Conservancy. “We have partnered with others to lay the foundation for an active and vibrant downtown that has and will continue to contribute to the attraction of businesses, residents and visitors to Detroit.”

The study prepared by Conventions, Sports & Leisure International also estimates more than $1 billion in future riverfront public and private investment and annual spending that would continue to add to the transformation of the riverfront area into a vibrant live-work-play environment. These include the future development of the 40-acre Uniroyal site and various east riverfront mixed-use projects. Riverfront improvements have supported 16,700 construction jobs over the course of the project, and provide on-going annual support for 1,300 jobs.

“The Detroit riverfront is perhaps the most valuable waterfront property in the United States that still has significant opportunities for development,” said George W. Jackson, Jr., president and CEO of Detroit Economic Growth Corp. “The Detroit RiverFront Conservancy and its public, philanthropic, and private partners have literally paved the way for economic revitalization by building the Detroit RiverWalk and making other infrastructure improvements. The economic impact reported today is only the first wave of results we expect to see as we all contribute to the accelerating momentum here.”

During 2012, Conventions, Sports & Leisure’s partner, Custom Intercept Solutions, conducted 1,500 in-person intercept interviews with visitors to the riverfront.  The study reported a number of findings, including:

The complete Economic Impact Study can be downloaded from the Conservancy’s website at DetroitRiverfront.org.