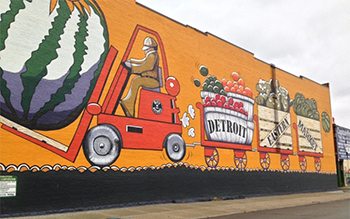 DETROIT — The Eastern Market Farmer’s Mural has been restored due to a donation of more than 130 gallons of Behr Marqueetm Exterior Paint & Primer from Masco Corp., parent company of Behr Process Corp.

The restoration of the vintage Farmer’s Mural on the Fisher Freeway service drive started in the fall of 2013 and was completed this spring. The mural has served as the southern gateway to the district since the early 1970s.

Behr custom blended each paint color to match the colors in the original artwork.

The original Farmer’s Mural was the vision of former City of Detroit planner Alex Pollock, who while working for the city in the early 1970s, conceived of and executed public art projects in the Eastern Market district and throughout the entire city.

Funding for the Farmer’s Mural restoration was made possible by a grant from the Hudson-Webber Foundation and a Community Development Block Grant from the City of Detroit.

Leading the project was Vito Valdez, a local artist and educator with the Detroit Institute of Arts, who has been responsible for several murals throughout Detroit.