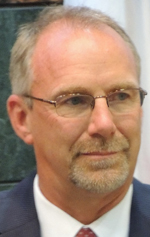 TAYLOR — The Detroit Region Aerotropolis Development Corp. has hired Tim Keyes as its new CEO. In addition, it has completed a strategic marketing and organizational plan, and is rebranding itself as VantagePort.

“It took us longer than we had hoped but we’re pleased to have a highly qualified CEO dedicated to leading our efforts,” Verna McDaniel, Washtenaw County administrator and Interim chair, said. “We conducted a public search, received over 60 applications and after a complete review, we are confident that Tim Keyes is the best candidate to accomplish what we want done. Tim is very familiar with the Aerotropolis as he has been engaged to some degree with our work from the beginning, which will enable him to jumpstart the initiative and re-energize our efforts.”

“The Aerotropolis is a major driver of economic development in Wayne County and the state of Michigan as a whole,” said Wayne County Executive Robert Ficano.

“I am happy to see someone who has been involved in the project since day one, be named CEO. I have no doubt that Tim will be able to jump right in and continue to move the Detroit Region Aerotropolis forward. We look forward to working with Tim to make this happen,” Ficano said.

The board worked with Applied Storytelling, a brand management firm, to select the VantagePort name.

VantagePort hired Greyhill Advisors, a global site selection and economic development consulting firm, to prepare a strategic plan for the organization.  The Greyhill report will be used as a guide for VantagePort’s next steps. Some of the recommendations include:

These recommendations will be executed by Keyes.

“The development of the Aerotropolis was identified as a key component in accelerating growth in Southeast Michigan in Business Leaders for Michigan’s New Michigan strategy and in Detroit Renaissance’s Road to Renaissance initiative,” said Doug Rothwell, president and CEO of Business Leaders for Michigan.  “We have tremendous assets we can leverage to grow our state’s economy, including a world class airport, surrounding land available for development, a unique geographic location and a skilled workforce. Now that we have a CEO of Tim’s caliber in place, we can move with lightning speed to implement this effort.”

Ficano had long envisioned an Aerotropolis for the Detroit Region and the Detroit Region Aerotropolis was a part of the Detroit Renaissance (now Business Leaders for Michigan) Road to Renaissance strategy to help grow the economy for the entire Detroit region. The goal was to develop the area between and surrounding Detroit Metro and Willow Run airports into a global logistics hub for the movement of people, products and information. Over the long term, the Aerotropolis is projected to attract more than 60,000 jobs to the region and more than $10 billion of additional annual economic activity with an aggressive business attraction effort.