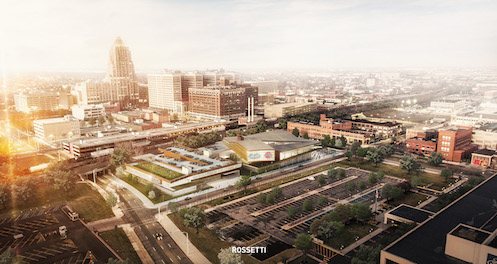 The Detroit Pistons and Henry Ford Health System today announced plans to build a new 100,000-square-foot training, rehabilitation, and sports medicine complex in Detroit’s New Center area. The site is bordered by Amsterdam Street, Second and Third Avenues, and a set of railroad tracks to the north. Construction is expected to begin this summer.

The complex will be built on a parcel owned by Henry Ford approximately one half block north of the health system’s headquarters, and approximately two miles north of the Little Caesars Arena, where the Pistons will begin playing games next season. As part of the agreement, Henry Ford will become the official health care provider for the Pistons beginning with the 2017-2018 season, and will have naming rights for the new performance center complex.

“This is a groundbreaking alliance between two institutions committed to making a difference in Detroit,” says Gores. “It’s a long-term partnership that establishes another building block in the revitalization and rebuilding of our city.  It’s also an important investment in our team, providing Stan (Van Gundy, president pf basketball operations and head coach) and our players with the best training and development resources available anywhere.”

The privately-financed facility will also include corporate offices for the Pistons and Palace Sports and Entertainment staff, as well as public activation spaces.

“It’s going to be a state-of-the-art performance center for our players, augmenting our normal practice facility resources with comprehensive health, conditioning, nutrition and medical support,” says Van Gundy. “It will bring together basketball, nutrition, training, treatment and rehabilitation resources under one roof, in an environment that will put our players in the best position to succeed.”

Detroit Mayor Mike Duggan calls the center an “investment in the organization’s future business,” and “evidence of the city’s continued turnaround.”

“This is an exciting time for our city.  Not only will we have all four major sports teams playing here, all of their corporate headquarters now will be in Detroit as well,” says Duggan.  “All of this development will bring a significant economic impact to our city and jobs for our residents.”

The facility will be outfitted with the latest basketball training equipment and allow for “seamless accessibility” for players and team medical practitioners when injury diagnosis or treatment is needed.

The project is expected to create additional short-term construction-related jobs and provide future income tax and property tax revenues for the city. Specific costs and economic projections have not been released.