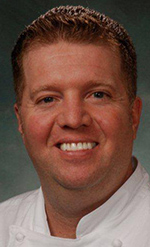 DETROIT — Brett Montgomery has been named executive chef of the Detroit Marriott at the Renaissance Center.

Montgomery graduated with an AAS in culinary arts from Paul Smith’s College in N.Y.. He then gained his certified as an executive chef from the American Culinary Federation.