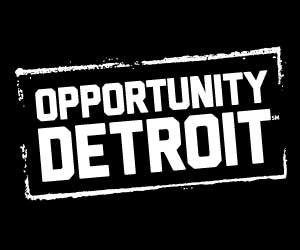 This bold and aggressive plan is part of the Opportunity Detroit initiative to encourage people to live, work, play and invest in the city of Detroit. Powered by Rock Ventures, it combines more than seven months of research and engagement with key Detroit public and private stakeholders and incorporates the best thinking of four top urban consulting firms:  Project for Public Spaces, Shook Kelly, Gibbs Planning Group and Terremark Partners.

“Downtown Detroit’s geographic location and particularly the half mile from the Detroit River to Grand Circus Park is the most concentrated diversity of urban assets and placemaking opportunities anywhere in the world,” said Fred Kent, founder of Project for Public Spaces. “From the riverfront, gaming, gourmet dining, sports, culture and entertainment to new retail, Detroit has a winning combination of attractions to reclaim its rightful place as a great American city on the international stage.”

Placemaking is about creating activity and vibrant, exciting places using a multi-faceted approach to the planning, design and management of public spaces. In Detroit it is about getting as many people out on the street experiencing and enjoying the various assets the city’s urban core has to offer.

The plan is centered on creating six distinct and unique destinations that draw people to the region, give them an experience that will make them want to return frequently and where they will want to spend more time. Woodward Avenue becomes a major boulevard connecting these great destinations.

George W. Jackson, Jr., president and CEO of Detroit Economic Growth Corp. said, “We know what works from our successes promoting places such as the Paradise Valley Cultural and Entertainment District. You start with a well-designed public space, encourage organized activities there, and thoughtfully redevelop key buildings around that space to create a neighborhood with an authentic and memorable identity. This is a great time to replicate that success in several other Downtown places, and we are pleased that we have the public-private collaborations to do it.”

Much of the groundwork for this latest bold effort was laid in the past few years by the corporate, foundation, education and health care organizations that continue to reinvest in the city. It also ties together the threads created by Rock Ventures’ purchase of 22 buildings, 3 million square feet of commercial real estate, and nearly $1 billion invested in the Central Business District since 2010.

“Detroit stakeholders need to know this vision is real,” said Dan Gilbert, chairman and founder of Rock Ventures and Quicken Loans. “It is a wildly-exciting, incredibly well-thought out plan that will be activated immediately.  Residents, office workers and visitors will experience a dramatically different Detroit in two years. We are committed to impacting the outcome and we are relentless in getting every Detroiter to join us in this campaign.”