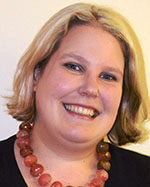 DETROIT — Kate Baker has joined the Detroit Historical Society in the role of Managing Director. Reporting to Executive Director and CEO Bob Bury, Baker oversees the operations, development, and marketing/public relations/sales functions for the Society.

In addition to her professional work, Baker served on the Ferndale City Council, as Ferndale’s Mayor Pro Tem and interim Mayor from 2008 to 2012. She is active on many local nonprofit and political boards including serving as a founding board member of FernCare Free Clinic, the vice chair of the Ferndale Planning Commission and Ferndale Education Foundation, and as a member of the Wayne State University Press and Oakland Housing boards.

Baker holds a B.A. in government and urban studies from Smith College and is pursuing a Master of urban planning from Wayne State. Crain’s Detroit Business Recognized Baker as one of their “20 in Their 20’s” in 2007, and she is a member of the 2012-13 inaugural class of the Urban Land Institute’s Larson Center for Leadership.