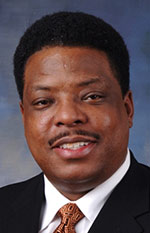 DETROIT — Richard K. Martin, a fundraiser who has been a leader in Michigan and around the world in encouraging the profession to address the issues of diversity and inclusion, is the recipient of the Chair’s Award for Outstanding Service presented by the Association of Fundraising Professionals.

The Chair’s Award is given to individuals for exceptional service to the association, the fundraising profession and the philanthropic community.

Martin is chief advancement officer for Lutheran Social Services of Michigan, one of the largest faith-based nonprofits in the state, with 80 programs in 44 cities.

After nearly 10 years in manufacturing and finance, Martin left to pursue a career in philanthropy. Throughout his career, Martin has dedicated his time and efforts to introducing African-Americans to careers in fundraising and encouraging individuals and organizations to create a welcoming culture for diversity. He has taught and mentored thousands of fundraisers in techniques and practices of professional fundraising.

Martin has led the AFP Greater Detroit Chapter as president in 2007 and 2008 and he also served on the board of AFP International, including two years as treasurer of the association, and is a member of the AFP Foundation for Philanthropy’s Leadership Society.