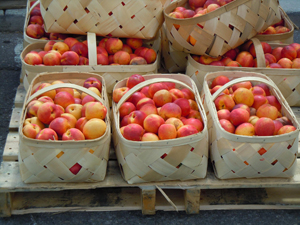 From providing a walk-in cooler for curing handcrafted sausages to paying for a pie-crimping machine, 16 Detroit food-based businesses are getting an economic push by sharing portions of a $30,000 grant from Charter One Bank.

Charter One and Detroit’s Eastern Market teamed to form the Growing Communities Partnership, which develops and expands local food resources in Detroit. This is the second round of grants provided by the partnership ($20,000 in grants were provided in July).


The money is targeted to small, recently started businesses or urban farmers who produce a variety of food that is locally grown or produced. Many of the grants went to Eastern Market vendors.
“Made in Detroit is coming to mean more than new cars and trucks,” says Dan Carmody, president of Eastern Market Corp. “It’s beginning to mean locally-made pies, sausage, freshly-grown produce, and so much more that makes up our rapidly expanding local food industry.”


With a surge in restaurant and café openings, as well as a spike in urban agriculture, the grants are designed to empower a community of food entrepreneurs and spur economic development in Detroit and the state.
“The local food industry in metro Detroit is truly becoming a growth industry,” says Elizabeth Dryden, Charter One’s spokeswoman. “(Eastern Market was) an organic fit for neighborhood revitalization.”


Several grant recipients will utilize their awards for vendor display improvements in an effort to expand their sales and distribution. Others will use the funds to improve their products.


Corridor Sausage Co. is using the $3,000 award for a walk-in cooler that has already “facilitated a lot more volume,” says owner Will Branch. With the new space, the company will expand its curing offerings. “We can start selling in grocery stores, which is a big tipping point for us,” he says.


Ruth Bell, a recipient of $1,280 and the owner of Chugga’s Main Street Bakery, agrees with Branch. “We have to eat to survive and people are trying to do whatever they can to make more,” she says.
Although the second round of grant funding ended in mid-September, look for more funding opportunities from Charter One and Eastern Market. “We intend to continue this effort,” Dryden says.


Other grant recipients include: