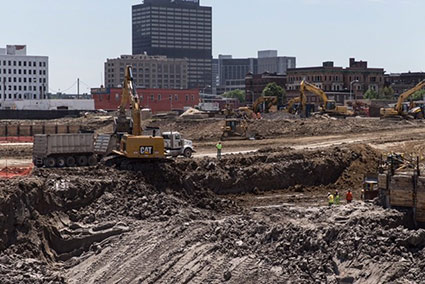 DETROIT — In just six short weeks since mass excavation began on the new Detroit Events Center site, crews have removed more than 225,000 cubic yards of soil to make way for the centerpiece of The District Detroit’s Woodward Square neighborhood.

The new arena will be home to the Detroit Red Wings, other sports and entertainment events, concerts, family shows and community functions. Crews working on site are nearly half of the way to removing an estimated 480,000 cubic yards of dirt for the Events Center bowl.

“Seeing the transformation that is taking place on this critical stretch of Woodward Avenue is exciting,” says Steve Marquardt, vice president of Olympia Development of Michigan. “We are working hard to create one of the world’s premier urban environments, featuring a Detroit-fueled arena design that’s great for fans and visitors, a neighborhood-friendly profile and active shops, offices and public spaces.  The District Detroit will be a connector for the great things that are happening in our city.”

Marquardt says excavation currently underway will create a dramatic arena bowl for fans and world-class seating options for guests at concerts, family shows and other events. Fans will also be able to enter the arena’s concourse between upper and lower bowls at street-level, unlike traditional arenas that require patrons to scale steps to reach the concourse. Additionally, excavation will optimize the visual impact of the arena on the surrounding neighborhood, resulting in an overall height 20 percent lower than typical arenas.

“The new arena will set the standard for the things that make a fan experience unforgettable: proximity to the action, sight lines, amenities and technology. Fans are going to love this newer, personalized experience — it will be a very exciting place to be,” says Tom Wilson, president of Olympia Entertainment. “Crews are hard at work on site, and we are making great progress on the arena bowl and the mixed-use buildings surrounding it.”

In addition to mass excavation, work is taking place on site includes relocation of utilities, creating construction roadways and the placement of construction trailers. The next phase of work on site will include the placement of caissons, setting the foundation of the Events Center. That work is expected to begin in July.

“This is a once in a lifetime project in our hometown, built with Detroit businesses and by Detroit labor,” says Kerlin Blaise, owner of Blaze Construction. “There is real energy, excitement and pride coming from the crews at the construction site who are working hard to remove soil and dig the bowl of the new events center. It’s a great feeling to be a part of the District Detroit project,”

To date, the Detroit Downtown Development Authority has approved seven contracts for the project worth $85 million, of which, Detroit-based and -headquartered businesses have won more than 90 percent, or $78 million.

The District Detroit will be made up of a dynamic mix of sports and entertainment venues, including six world-class theatres and three multi-use sports venues – home to the Detroit Red Wings, the Detroit Tigers and the Detroit Lions. The District Detroit will also feature residential, office and retail developments that connect these venues into one contiguous, walkable area, where families, sports fans, entrepreneurs, job seekers, entertainment lovers and others who crave a vibrant urban setting can connect with each other and the city they love.

Construction of the arena and surrounding District is expected to generate at least $1.8 billion in total economic impact, 8,300 construction and construction-related jobs and 1,100 permanent jobs. More than $100 million in income from the Events Center project alone is expected for Detroit residents, with significant additional income to be created through future private development.