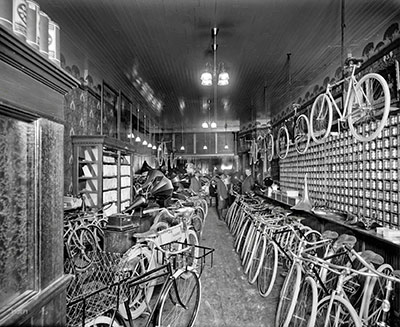 DETROIT — Detroit Bikes will open its first retail location May 8 in downtown Detroit with an all-day event to showcase the company’s hand-made bicycles manufactured in Detroit.

The flagship store, Detroit Bikes 1216, is on the first floor of the Albert apartment building in the heart of Capitol Park, 1216 Griswold. The 1,200 square-foot space has been restored to reveal ornate crown moldings and stone columns. New features like oak paneling and antique display cases give Detroit Bikes 1216 a vintage feel.

In fact, Metzger’s Bicycle Shop, one of Detroit’s historic stores, which stood on Woodward Avenue, inspired the new store’s design. “We can’t wait for people to see it,” says  Zak Pashak, president and founder. “Detroit Bikes 1216 is beautiful and evokes the city’s rich cycling history.”

Founded in 2011, Detroit Bikes manufactures accessible, quality bicycles in a 50,000 square-foot factory on Detroit’s west side with a capacity to produce 100 bicycles a day. Detroit Bikes 1216 will serve as the showroom for the company’s growing line of signature bicycles. In addition to its own cycles, 1216 will feature American made accessories and products by other local makers like Woodward Throwbacks and Better Life Bags.

As the first new retailer to move into Capitol Park, Detroit Bikes will expose audiences to a secluded part of downtown that’s undergoing a transformation. “It’s great to see people filling up some of the blank spaces,” says Josh Greenwood, owner of Urban Bean Coffee in Capitol Park. “People are starting to get out and venture past their cubicles and explore more of the city.”