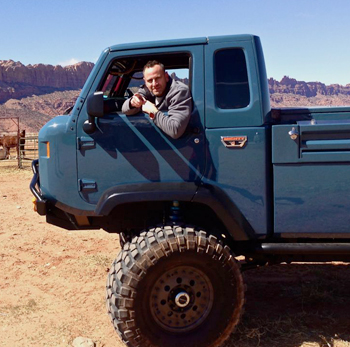 The boys from Detroit/Missoula-based American Expedition Vehicles (AEV) are in Moab, Utah this week for the annual Moab Easter Jeep Safari. AEV Principal Michael Chetcuti will blog daily from Moab, Utah, where off-road Jeepers descend by the thousands to ride the legendary, challenging, and breathtaking red-rocks terrain. Day-long organized trail runs culminate in a huge Saturday ride, always held the day before Easter. Here is the first of two installments.

Each year, a large contingent from Jeep comes to Moab to display the off-road prowess of Jeep, unveil concept vehicles, and touch base with their hard-core enthusiasts. Jeep Design Director Mark Allen and Senior Designer Kyle Evans are also here this week, though it is hard to say where the “work” ends and the “play” begins.

“It’s a blast,” Mark said. “Even though we’ve been coming out for years, each year there is somebody coming along for the first time and it’s fun to see their reactions to the scene and to see what these vehicles can do under extreme off-road conditions.

“Jeeps are all designed and engineered in Detroit, but they are driven worldwide. Moab is a special place, Mecca for Jeepers in the United States. We make it a mission to come out here every year to learn from our customers and listen to their ideas.”

I formed a friendship and working relationship with Mark in 2007 when we designed and built the SEMA-famed SR 392 roadster concept. I had just become involved at AEV, which has become the world’s premier aftermarket supplier for Jeep Wrangler, the most modified vehicle built anywhere. Jeep has been terrific. They have always worked closely with the aftermarket, making sure their design and engineering is capable of modification.

“It’s great to come to Easter Safari because everybody’s here,” Kyle said. “The event provides us with the ideal opportunity to interact and work with the aftermarket guys, including driving the products they’re using. And, our concept vehicles give us the chance to test ideas on our most dedicated customer base.”

Last year, Kyle designed the Forward Control concept and it turned Moab on its ear. It is probably Jeep’s most extreme modification on a Wrangler and recalls a similar vehicle produced decades ago by Willys and Kaiser Jeep. The modern FC concept is built on a stock JK frame and allows for a pickup bed on a vehicle that is nimble enough for off-road purposes.

“What’s really important is that coming to Moab puts us in touch with our people, which helps us keep our vehicles authentic and real,” Mark adds.

Once again Motor City know-how is touching hearts, only this time way out on the beautiful red rocks of the Moab Rim.