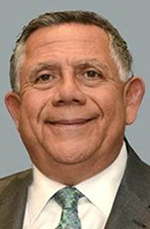 Frank Venegas Jr., chairman and CEO of the Ideal Group, a construction company headquartered in Detroit, attended the Oxford Business Poverty Conference from July 4-5 to accept an honorary doctorate degree in humane letters.

Venegas earned the degree through his entrepreneurial career and philanthropic success in Detroit. At the conference, he also co-presented his southwest Detroit community business model with Leonard Greenhalgh, professor of management at the Tuck School of Business at Dartmouth College. Hosted at the Saïd Business School at the University of Oxford, a collegiate research university in Oxford, England, Venegas appeared as the opening guest speaker for the conference.

Venegas has served southwest Detroit community for nearly 20 years as a member of the Michigan Minority Supplier Development Council board of directors and chairman of the board of directors for the Detroit Hispanic Development Council. He is also a member of Detroit Regional Chamber and Detroit Riverfront Conservancy boards. He has also sponsored emerging entrepreneurs to attend the same minority business executive programs he completed at Dartmouth.

Venegas, of Detroit, earned a bachelor of humane letters.