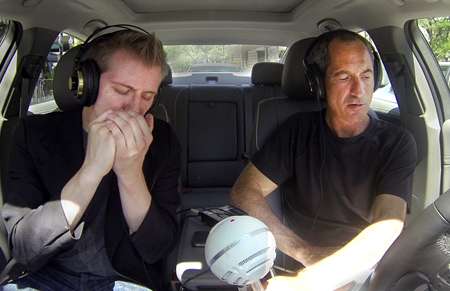 DETROIT — Many people sing in their cars, but few sound as good doing it as Frankie Turner, lead singer of Detroit-based blues-rock band The Gentlemen Mutineers. Frankie as his fans know him, recently sang in the 2014 Chevrolet Impala, using the full-size sedan as a “mobile studio” to record an “Impala Mix” of their party anthem “Detroit Throttle.”

“The Corktown wobble, the Motor City slide, some Detroit throttle with that good time vibe, we’ll get in the Impala and take that ride, ‘til we feel like we’re 25 miles above the sky,” Frankie sang while Mark Pastoria of Harmonie Park Studios recorded it onto a laptop computer. In addition to the chorus, the band also recorded harmonica and trombone tracks in the car for the song.

“I am amazed at how quiet the Impala is,” Pastoria said, after playing the vocal recording through Impala’s audio system. “It was important that we wouldn’t hear background noise while recording, and with all that was going on outside the car, I am astounded that we couldn’t hear any of it. The Impala rocks.”

The new Impala is quiet by design, due in part to a technology that audiophiles know well – the active noise-cancelling technology used in high-end headphones. Active Noise Cancellation is standard on new Impalas with four-cylinder powertrains and helps make the redesigned flagship Chevrolet’s quietest full-size sedan ever.

Active noise cancellation even helps owners of the new Impala save money at the pump by using three ceiling-mounted microphones to detect low frequency engine noise during idling. The frequencies are processed by an onboard computer that directs counteracting sound waves through the audio system’s speakers and subwoofer.

This technology allows the engine to operate at the fuel-conserving range of 1,000 to 1,500 RPM, and helps eliminate the need for some sound-deadening materials, all of which contributes to improved fuel efficiency.

Impala also uses a variety of sound-buffering and -absorbing materials to minimize wind, road and engine noise, including:

“Having a quiet cabin makes it easier for Impala’s voice recognition software to understand commands,” said Kara Gordon, a General Motors’ noise and vibration performance engineer. “A quieter cabin also makes it easier for front and backseat passengers to have a conversation at normal speaking levels.”

Voice recognition is part of the MyLink system that comes standard on LT and LTZ models, and helps drivers safely place calls, enter destinations and control other functions while keeping their eyes on the road and hands on the wheel.

To make the Impala as quiet as possible, Gordon worked with Stephanie Ernster, a GM noise and vibration engineering specialist and friend since their college days at Michigan State University.

“Achieving a high level of acoustic refinement requires the most advanced tools available and many hours of road testing,” Ernster said. “The new Impala benefitted from both, resulting in a quiet driving experience that is truly something to sing about.”