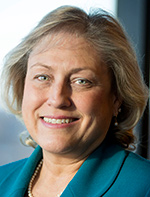 Donna Inch has been elected president of the Dearborn Country Club, the first female president in the 90-year history of the club, a private golf, dining ,and social club in Dearborn.

The election has particular historical significance as Inch serves as chairman and CEO of Ford Motor Land Development Corp.; the club was founded in 1925 by Henry Ford as a country club for his friends and employees. Donald Ross, renowned golf course architect, designed the original 18-hole championship golf course on 160 acres set aside by Ford.

She was appointed chairman of the board of the Detroit Metro Convention and Visitors Bureau in 2014 and serves in an advisory capacity for a number of national/global real estate organizations. She also serves as a board member of HAVEN, a non-profit organization in Oakland County that promotes a world of safe, equal and accountable communities. Inch also is a member of the board of trustees for the Henry Ford Estate (Fairlane) and serves on the University of Michigan-Dearborn Citizens Advisory Committee. Inch serves as a member of the Eastern Michigan University  Dean’s Advisory Board and is the Ford Corporate Executive Champion.

Inch was recognized as one of the top women in finance in the November 2009 Treasury and Risk magazine. She was inducted into the Midwest Real Estate Hall of Fame in 2011, featured in DBusiness magazine’s “2013 Powered By Women,” and named one of WJR’s “Women Who Lead” in 2013. Most recently, Inch was named a Women and Leadership in the Workplace 2014 honoree and the 2014 Dearborn Area Chamber of Commerce Leadership Award recipient.