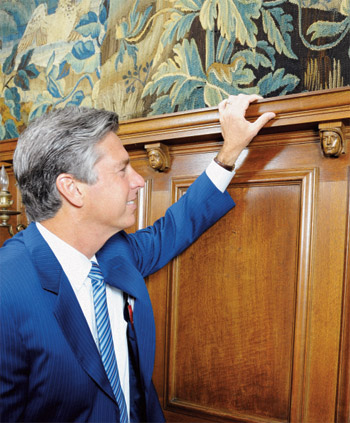 Taking time out from running the $138.7-million payroll of the Detroit Tigers, Dave Dombrowski sought inspiration from the team’s power hitters of yesteryear — like slugger Hank Greenberg, who helped land the city’s first World Series title in 1935. During a recent visit to the Walter O. Briggs mansion in Detroit’s Historic Boston-Edison District, Dombrowski marveled over the oak carvings of Greenberg and other team luminaries like Ty Cobb and Charlie Gehringer. “What a time it must have been when Briggs owned the Tigers,” says Dombrowski, the team’s president, CEO, and general manager. “I wonder how many great players visited here.” Eyeing a possible playoff run this year, Dombrowski hoped some of the team’s past glories would carry forward. “Winning a World Series is what we strive for, but there are no guarantees,” he says. “Everyone has to give it their all, or we won’t get there.”