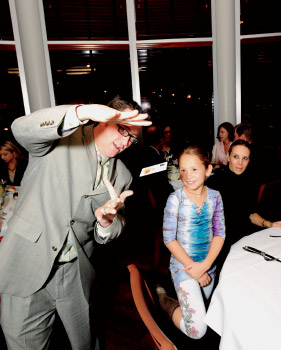 While great food in a memorable setting makes for a busy eatery, a little magic can draw patrons, as well. For Dave Barton, guest services manager at the new Ocean Prime in Troy, that means performing a host of tableside tricks, including one with a spinning card that appears to be suspended in mid-air. “I picked up magic as a kid and it just never left me,” says Barton, left. “It recharges my battery, and you get to meet a lot of interesting people.” Often called “Magic Dave,” Barton can pull the cork out of the bottom of an otherwise empty wine bottle, move a small red bulb through his body, make table salt disappear, or perform more than a dozen other tricks. “I don’t do magic every night, but sometimes people need a little cheering up,” Barton says. He first appeared on the local scene at Cameron’s Steakhouse in downtown Birmingham, before moving to Ocean Prime in June. The magic, along with the food and ambiance, must be working. Ocean Prime, with 400 seats, including a private dining room, averages around $1 million a month in sales. The restaurant is the creation of Cameron Mitchell, who recently sold 33 of his locations — Mitchell’s Fish Market and Cameron’s Steakhouse — to Ruth’s Chris for $92 million. “The fact that the first Ocean Prime opened in Troy speaks a lot to the region,” Barton says. “The economy is much more diverse than just automotive.”