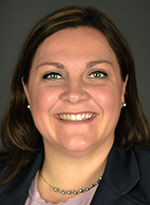 FARMINGTON HILLS — Melissa Greer has been named the new executive director of the Crohn’s & Colitis Foundation of America, Michigan Chapter.

In her new role, Greer will lead the organization which assists thousands of Crohn’s and Colitis patients throughout the state. She will be responsible for managing staff, increasing fundraising, implementing new programs and working with board of directors.

Previously, Greer worked at the March of Dimes of Michigan. Most recently she served as the state director for the March for Babies walk program, where she managed logistics and tactics for 18 events with a $3.2 million budget. Greer created local corporate sponsorships which garnered more than $1 million, including much from the Big Three automakers, in new money in her more than 10 years with the March of Dimes.

Greer, of Brownstown, earned her Bachelor of Arts in communication and public relations from the University of Michigan.