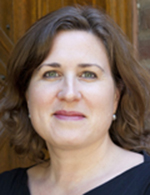 BLOOMFIELD HILLS — Cranbrook Educational Community has named Sarah Turner as the newly-created position of Dean of Cranbrook Academy of Art. Turner, a graduate of the Academy, joined the administrative team in 2008 as assistant director for Academic Affairs and in 2012 became the associate director of the Academy.

In her new role, Turner will oversee academic programs and partnerships, and provide support to the Academy’s 10 studio departments. She will also continue to oversee enrollment services and the Academy’s support departments.

“Having Sarah in the position of Dean will further enhance our academic programs and allow Cranbrook to provide unparalleled resources to our students,” Reed Kroloff said, director of Cranbrook Academy of Art and Art Museum. “During her five years as a member of our administrative team, Sarah has revitalized our Critical Studies and Humanities programs and helped us expand the dialog of art and design at both the local and national levels. I look forward to all she will bring to the Academy in her new position.”

Turner received a Master of Fine Arts degree in metalsmithing from Cranbrook Academy of Art in 2005. Turner was awarded a Fulbright Fellowship to the Netherlands to conduct research in the field of Dutch contemporary jewelry and applied art. In association with the Gerrit Rietveld Academy, she produced the exhibition Long Strides in Tiny Shoes. Turner has lectured about her own studio work as well as Dutch and American contemporary jewelry and metalsmithing both nationally and in Europe. She is a regular guest reviewer and juror in art and design programs around the country. Turner is a board member of the Michigan Fulbright Chapter. She also holds a certificate from the Oregon College of Art and Craft and a B.A. in Sociology from Smith College.

“I look forward to the challenges ahead as Cranbrook Academy of Art continues to produce some of the most sought-after architects, artists and designers in the world,” Turner said. “Our talented Artists-in-Residence continue to offer intensive programs that attract top talent, and my new position will allow me to help them grow and enhance their offerings.”