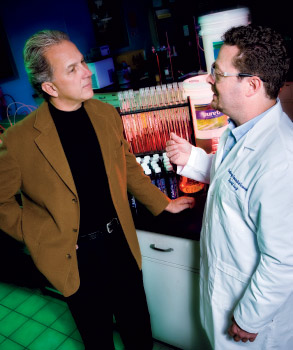 With a handful of revolutionary products, including a translucent spray called Pureti that breaks down organic materials like grime, bio-film, greenhouse gases, and volatile organic compounds on interior and exterior surfaces, Craig A. Andrews is anticipating revenue growth. As CEO of CSG (formerly Coating Specialist Group) in Rochester Hills, Andrews, left, projects sales could reach $30 million by 2010. “Our product line is really geared toward sustainability,” he says. “Our Pureti products are activated by sunlight, and treated surfaces [only] need to be cleaned half as often, so you use less chemicals, less water, and less energy.” During a visit to the company’s laboratory in Auburn Hills, Andrews and CSG Vice President Daniel Juzi, right, also showed off the company’s FabricAide product line, a laundry additive that inhibits microbial contaminants such as bacteria, mold, and mildew. A 4-ounce treatment will last up to 30 loads. The additive also extends the life of clothing, Juzi says. “FabricAide bonds to clothing,” he says, “so it stays on and keeps on working.”

The product is used in the National Football League, Major League Baseball, National Basketball Association, National Hockey League, and by myriad hospitals, high schools, and athletic clubs. To prepare for its growth, the company is scouting for a larger production facility in Auburn Hills and is in the process of hiring up to 200 people over the next five years. While the company has numerous customers, Pureti will also soon be applied to the “Hollywood” sign outside of Los Angeles, helping to celebrate the 30-year anniversary of the landmark’s manifest reconstruction.