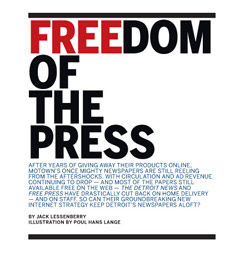 I was really interested in Jack Lessenberry’s feature on the newspaper business (“Freedom of the Press,” July/August 2009) and particular the sidebar on suburban newspapers, “Who’ll Mind the Store?” In our communities of Oxford, Lake Orion, [Clarkston] and Ortonville/Goodrich the answer is, “us.” We the oft over-looked, looked-down upon and snickered at — community newspapers. This is not a boast, nor a nanny-nanny-poo-poo to you. I am sad at the state of newspapering. Phil Powers was correct when he said the business model for the mega-chains, daily papers and regional papers is broken.

On the other hand, community newspapers like ours across the nation are surviving (some even growing). One reason, we’re local. We have brick and mortar buildings in the towns we serve. We pay taxes locally. Residents know our faces when they see us shopping. They know where to find us if they are whizzed off at an editorial or a columnist. We care about our communities and don’t just think about taking money out of our communities.

Don’t get me wrong. It’s a fight to remain relevant and we’ve taken our hits. New folks come in all the time with different advertising mediums or “community” newspapers. Heck, even Phil with tons of resources tried to come into our neck of the woods and make money. Thankfully with the support of many local residents we have been able to roll with the punches and grow. As Phil and Jack both know, communities with a newspaper are stronger communities. I believe our communities are stronger, more in-tune because of our efforts.

I think newspapers in general (us too) have let ourselves be taken for granted. I think we need to use a basic science-fiction writer tactic. We need to keep asking our readers, “What if?” What if there is no newspaper. We need to start folks thinking long-term.

Thanks for the work, DB and Jack Lessenberry!