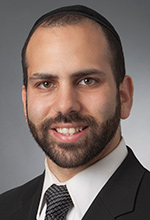 Klein will focus his practice primarily on analyzing and litigating insurance coverage disputes. Previously, he worked with the Hon. Judge Brigid McGrath in the Circuit Court of Cook County, Ill. where he researched and advised the court on numerous issues of commercial law. Since then, Klein’s professional career has focused on application, interpretation, and litigation of various types of insurance policies.

Klein is a member of the Chicago Bar Association and the Oakland County Bar Association. He is admitted to practice in all state courts of Michigan and Illinois, and each of the U.S. District Courts of each state. He speaks Hebrew and is active within his synagogue and the greater Metro-Detroit Jewish community. Klein recently moved back from Illinois and is now a resident of Oak Park.

Klein received a Bachelor of Arts from the University of Michigan and his juris doctor from Chicago – Kent College of Law.